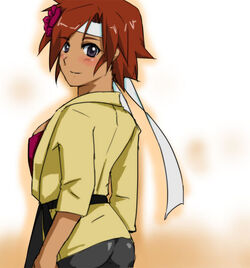 It is not unusual for cruel fate to take a hand in affairs in Ranocchio. One stormy night 11 years past, fate struck a blow to the ramshackle building that the Frost family called home. A particularly violent wind twisted the poor excuse for a roof, snapping two of the supports clean in twain. The building collapsed, trapping the family within. The only good fortune in this disaster came from the building being located near the Shrine of the Silverfish, a brotherly order who did what they could for the residents. They were no world savers, but a kind word or a comforting smile or hug was usually found there when one was so full of dispair....

So it was that two of the brothers, who happened to be in the misfortune of traveling through this near gale were sheltering nearby and saw the home collapse and heard the screams of those trapped inside. They made their way to the crumpled remains of the building and began digging through the wreckage as others watched with almost no emotion from the neighboring hovels. There were 4 members to the Frost family. Within the wreckage of the house, three were found. The Mother and Father, both found dead, impaled by chunks and splinters of the debris, and their youngest child, their daughter, Audra. There was no sign of the elder child, a boy named Alecks. The girl was injured, unconscious but alive. The brothers took her and made their way, slowly through the gale, to the grouping of huts they called their Temple home.

The next morning, Audra returned to her ruined home, three of the brothers coming along with her. She was in her tattered hemp dress, carefully picking her barefooted way through the debris. Her parents bodies where still there, undisturbed. She bade them her goodbyes and set about looking for her brother and anything she might could salvage. The brothers saw to the bodies, promising the girl they would be properly attended. During her search, Audra found most of the families meager possessions gone. Not destroyed, but likely scavenged in the overnight. She thought she would have no memory until something caught her eye, peeking from beneath what once had been an excuse for a piece of their roof. Determinedly, she got her arm under it and retrieved the small, worn leather box. Its color matched that of the debris around it, probably why it hadn't been looted. This she lifted and opened. Within was her mother's most prized possession. A simple silver chain of fine links, or so they looked to her. This trinket had been in her family for four generations, from one eldest daughter to the next, presented on their thirteenth birthday. She clutched the box to her chest and stepped from the ruins of her home. She wasn't sure where she would go, but one of the brothers motioned for her to follow him.

Back within the Temple of the Silverfish, a debate raged while the girl sat in. Finally Hallaran, a wisened old Halfling, the eldest of the brothers, stood from his stool and walked over to stand before the girl.

"It has been decided that we shall make a most unusual offer. We have never invited a woman to join our ranks before. However, your parents were not unknown to us. Hard working, honest people both. If you wish, you may join us, but it means joining the Order of the Silverfish. You will learn and train as we do. We can offer you a home, our hearts and a way you can deal with what has befallen you. The choice, young one, is yours."

Audra knew who had saved her from the wreckage of her home. She hesitated not one moment to accept the generous offer. She would become the best and strongest she could, to honor her parents memory, and so she could try to find out what had happened with her brother.

Ten years have now passed. Audra has trained rigorously with the brothers, and has seen two new brothers join the order. Both of them found it hard to accept 'Sister' as one of them at first, but time, and a good old fashioned butt whooping had helped them to see the errors of their judgements. Despite her young age when compared to the others of the order, Audra is highly respected amongst them, and by more than a few within Ranocchio. None there has spoken much to her of the night her parents died, and none there has yet had a lead on where her missing brother might be. She keeps an eye open for him, often thinking of him as she fades to sleep. She studies, she prays and she trains herself to be the strong woman she knew she could be 10 years past. While She is far from any form of Master, the has been determined to be able to move about on her own as a representative of the Temple of the Silverfish.

Normally she wears a simple brown cloak, one that flows down to her ankles, leaving only her sandal shod feet showing. Beneath she wears a modified version of the loose fitting gray with silver edging uniform of her Temple. Her tunic has been neatly cut and sewn, by her own hand, to leave her midriff bare. The pants are hemmed in in spots where they needed to be and cut back to stop halfway down her calves. Sometimes she walks with a quarterstaff, more for supporting herself on long walks and helping her keep her balance than for use as a weapon. In fact, she, like others of her order, prefers the use her own body as her weapon. Her hands, arms, feet, knees, legs and elbows all finely trained to respond to her thick, athletic muscles. Most of the order shaves their heads, but the did not require this of her. She has kept her hair practically cut, short and out of the way. Around her neck she now wears a simple silver chain. Plain and unremarkable to any who might notice it, but to her, the most valuable possession she has. Lately she has been asked to help attend to matters between her temple and others within the city, most notably the honored Temple of the Cricket, a favorite among the more affluent within the city. Other temples she has visited as well, many much like her own home, others more ornate and sturdy. These missions have taken her to many places within the City, and she has seen many of its wonders. This particular night she has concluded her meditations and gone to sleep before daylight has fully fled. Excitement passes around the brothers of the order as they prepare to order their first new sets of clothing in five years. One brother has patches upon his patches, even old Hallaran himself has worn holes in his clothing. Audra has been chosen to be the one to deliver the information to the clothier, the measurements that are required to create the garments. She also has been given a rare pleasure, that of a few coins to do something "special". As the coming day also provides the 10th anniversary of her parents death...

Retrieved from "https://livingpf.fandom.com/wiki/Audra_Frost_(Kaylian)?oldid=27433"
Community content is available under CC-BY-SA unless otherwise noted.