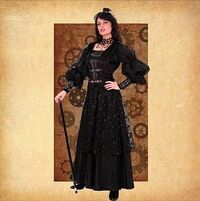 Appearance & Demeanor: Dame Sienna Morrogrim is a moderately tall woman. She has dark, black hair that shines like obsidian and is contrasted by her pale skin. Her eyes are hazel and turn almost golden in darken rooms. When she enters a room, most people will turn to look at her. She walks poised and confident. A faint smell of incense and exotic spices can be sensed when she walks by at times.

She wears a long black dress that is similar color to her hair. A bustier is decorated with feathered lines. These are actually throwing darts that are sewn into the ribs of the bustier. A brooch holds a scarf over her shoulders.

She is seen carrying a black walking cane that is carved from ebony wood and has a crystal embedded into the head. A black belt is around her waist and holds a dagger that appears to be ceremonial, but is mostly used for the mundane.

She is never without various trinkets and necessities. A grooming kit is close at hand, as well as anything that she may need to maintain a modest appearance even in the worst environments. She believes diplomacy and charm can be called on in any situation.

Dame Morrogrim is always ready for a client or consultation. Whenever she sits, she makes sure the table is always set with things that create a mood. A candle, bell or mirror, a covered bird cage (this may or may not hold Olkoi) and silver tea set, all on an embroidered table cloth.

Olkoi speaks common and is never far from Sienna. She is a typical looking thrush and draws very little attention. Many times she eave-drops on clients (or potential clients) to gather information for Sienna to use during a consultation. If not freely flying, Olkoi is hiding inside one of the pockets of Sienna’s scarf or very rarely in the cage.

Using her many spells, Olkoi’s assistance and occasionally a small charm, Sienna puts on a satisfying show for her clients. They nearly always leave pleased. This is often the case with most people after meeting her. They open up to her freely and reveal secrets that would normally not be told.

Sienna’s mother was a hedge witch in a small village outside of a large town. She would provide service to the citizens of the town, men and women, especially when discretion was needed. Her skills as a healer and midwife (and her steadfast dedication to confidentiality of her patients) were well known, but seldom talked about in public.

All could see Sienna was different, right from her birth. She was born with thick black hair that shined like obsidian. Her eyes were bright hazel that would turn almost golden at times. As she grew, her cheekbones became higher and more pronounced. Her mother would never talk about her father and most people never asked, simply assuming she was touched by the magic her mother possessed.

Sienna learned the magical arts through her mother, but she was not her mother. She didn’t possess the patience needed to calm the hysterical chamber maid, as she explained the “unfortunate” accident that happened with a duke or the respected business man that needed help getting rid a bout of something unpleasant he picked up in a trip to an unsavory part of town.

She also found early in her life that she had an unusual aptitude in gaining someone’s trust. This charm, coupled with her mother’s reputation and an air of mystery, doors that would usually stay tightly shut to a village girl were being opened. She began to gain access to the upper crust of society as a young adult; finding cohorts with the families best children. She was nearly raised in good parts of town, as much as with her mother in the village.

As she matured, she impressed the nobles and social elites with her adeptness in matters of occult. She started to provide services to certain ladies, as they asked. Her name became quickly known among the best circles as a prodigy with tarot cards and tea leaves. She was well sought after, as a confident and counselor throughout the town.

Eventually, she was asked to accompany a wealthy patron to the large city of Sprothen for a party of important dignitaries. Sprothen was the hub of the kingdom. Sienna’s mother was not pleased with the offer and forbade her to go, but after considering her argument and understanding that, even thought Sienna would never be a hedge witch, that she had reached the end of the training that her mother could provide; Sienna’s mother conceded and let her go. But, the only concession she had was that Sienna take Olkai, a young thrush that had adopted the family. Sienna held back a giggle at the thought that Olkai would not join her. They had been inseparable for a very long time.

The party was successful. Sienna wrote home that she would not be returning any time soon. She had already secured a few clients that would provide enough of an income to start a life in the big city. Even though she was called a fraud and imposter by the court’s prominent magicians and wizards, she became a minor celebrity among socialites looking for answers from beyond the veil.

Even her detractors had to concede that she was charming and there was very little harm in her advice. She made her way through the upper and nobility class with ease. She is known through most towns and is welcomed to provide her services. This provides access to many circles and she may not possess influence to the kings of the land, but she has the ear of most of the queens.

Retrieved from "https://livingpf.fandom.com/wiki/Dame_Sienna_Morrogrim_(Grayn)?oldid=32490"
Community content is available under CC-BY-SA unless otherwise noted.