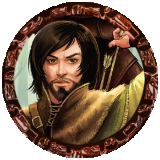 Marcus was adopted by a warm, loving farm family. His earliest memories he of his youth there involve frolicking around in fields of wheat or some other crop, chasing his brother around. Marcus was 3 years the younger and a Half-Elf in a human family, but his brother never looked at him as anything less than his equal.

Marcus didn't quite understand when his brother left, taking up a sword and heading off to fight some, to Marcus, imagined evil. A band of brigands traveled the lands, raiding villages that were poorly protected. Marcus thought these were just stories or a game until the day the brigands came to the farm. His mother hid him away in the outhouse while his father tried to make peace with the brigands, offering them what would have been a portion of the extra crops grown to sell. The deal didn't sit well with the brigands leader, a General Boralis. Marcus caught bits and pieces of names and conversations. It wasn't long before the band over ran the farm and both of Marcus' parents were put to the sword. The house, crops and livestock were ransacked and then put to the torch for what couldn't be carried. The outhouse was lit aflame last, Marcus able to squirm out through a small hole he kicked out in the back. He dove into the drainage ditch nearby and waited. It was nearly nightfall before he dared move back into the farm.

He stood there, a boy of perhaps 11 or 12 years in human reckoning, his heart totally lost in the carnage and destruction when a small squad of mounted soldiers from the local Lord, Lord Podera arrived, having seen the smoke. They questioned the lad, Marcus answering their questions as best as he could. They had him gather what he could and brought him back to their Lord's home. Marcus answered many questions to many different sorts of people there, but didn't flinch. He was there for nearly five days before he awoke to find his brother sitting in a chair nearby, a sword in scabbard in his lap. The two spoke, the brother trying to put on the brave face for Marcus, who hopped from his bed, hugged his brother and did what he could not before. He cried. The next time he cried was two weeks later, when word came that one of the Lord's patrols had encountered General Boralis and his band and engaged them. The brigands escaped, and all but one of the guards, including Marcus' brother, suffered terminal wounds.

The Lord had been none too keen on the idea of having a Half-Elf living beneath his roof. It had been the Lady Podera who had put her foot down on the matter, keeping Marcus' place secured. But after turning 17, Marcus asked to train to join the guard, to take up his brother's quest to put an end to the brigands. Marcus quickly found he had a good mind to control a longsword, and also discovered he had a natural talent with the bow. Given his Elven heritage, he was started on the longbow and soon was able to hold his own, though certainly no true master. Not yet, anyway.

The attacks of the brigands began to grow more and more daring. The Lord decided that he should send his wife, daughter and others from his House to a place of safety. The group packed into wagons and started the long voyage to Venza, where Lady Podera had family, living in the richer quarters of the city. Marcus was assigned to travel with the group as a bodyguard. He had learned not to question the orders he was given, no matter how much he might have wanted to stick to his brother's task. Sword on hip and bow and quivers over shoulders, he tromped the voyage to Venza alongside the wagons and horses. Luckily this group met with little adventure and arrived in Venza safely. Once there, the Lady Podera, her daughter and most of the others were provided quarters by her family. Marcus, however, was not as welcome when it was found he was Half-Elven. He stated that he would find his way around the city, but would be there if the family Podera should even require his blade or bow.

That was two years ago. Marcus has kept himself busy, serving as scout and escort on the occasional hunting trip or escorting some scatterbrained explorer into the wild on some fool chase. He has seen little real action and his thoughts continue to focus on his family's demise at the hands of the brigands. Until one night, sitting in a crusty old place with very little light and worse wine, he heard a couple of Gnomes discussing a story they had heard of the reanimated corpses that had, for years, roamed the countryside, some of which was near Lord Podera's land, that had a reputation for being ruthless killers and seemed to revel as much in destruction as they did in plunder. He nearly dropped his earthen mug when one of the Gnomes muttered the name "Boralis" in the naming of these horrible men. He knew then and there that there had been things his brother had never shared with him about the brigands. He thought back to the farm and seemed to recall from the few glances he got of them, mounted and not, how they seemed to be almost rotting in places. It had never occurred to him before. He closed his eyes and muttered a soft prayer for his family and waited for the two Gnomes to finish their drinks. When the barmaid came to take their plates and demand payment, he stepped in, paying. The two Gnomes, a little tipsy had no argument and seemed not to mind at all when he walked outside with them. As they walked through the vendor strewn streets, Marcus prodded the pair for any information they might have on these brigands. They said they had only heard stories, but if he sought adventure, he could find it at one particular Inn near the docks. He was given no assurance that he would find someone there who know of these brigands, but he had his lead. Something more than he had done the last two years. He thanked the Gnomes, walking with them as far as a alchemist shop, which they entered, and he set his feet for the Inn they had told him of and how to find.

Marcus had been assigned as the personal guard to the daughter of the Podera family, Atchka. Atchka was a student of magic, learning from the resident Wizard. Marcus attended many of her classes, during his duty as her personal protector within the house grounds and found the things she learned to be most intriguing. He quietly tried to remember all of the lessons he witnessed for future practice himself. The daughter caught him watching at one point, but waited until they were nearly back to her chamber before quietly questioning him. She told him she thought it was rather interesting he was taking such interest in magic. That if he wanted, she could ask the Wizard to see if he had the ability to do some of these things himself. He had told her he would be honored, but at that time didn't wish to intrude on her lessons. She wished him good night and entered her chamber, the door closing behind her. Marcus reported to his own bed not long afterwards. The next day, the events above of the patrol being attacked by General Boralis' brigands unfolded, as told above.

Retrieved from "https://livingpf.fandom.com/wiki/Marcus_Cole_(Artur_Hawkwing)?oldid=27891"
Community content is available under CC-BY-SA unless otherwise noted.