All roads lead to Venza, or so say Venzans. They would also say the Silver Road begins in the heart of Venza, the Benedetto piazza, also known as the Grand Piazza, but in practicality it begins in Baron's Cross just east of Venza on the mainland. The Silver Road runs north-northeast 400 miles to Tritower before turning eastward. 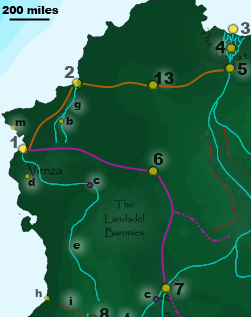 Eastward from Tritower the Silver Road stretches nearly 800 miles to end in the Delta city of Gist. The Barony of the Lost Hills with its capitol of Silverton lies at the midway mark of the eastern leg of the Road.

The Silver Road was originally an attempt by the Johnson Family, a struggling merchant families in Gist, to expand their market to Venza by creating an overland route. The portion from Venza to Tritower they found to be already roughly created, but the portion between Gist and Tritower was essentially created from scratch putting together a series of local roads and connecting them into a single continuous road. All went well for a generation, but the collapse of the mining industry in the Barony of the Lost Hills and family squabbles rendered the success a short lived one. The portion between Tritower and Venza continued to do hang on because of the number of large summer estates found along portions of it even after the general collapse of the road, even if it was largely forgotten by the rest of the world, but the Tritower to Gist segment didn't survive nearly as well, only maintaining a semblance of it's former self in the Silverton to Gist portion, and even that was just barely. The half century since the collapse of the road has left scars on the surrounding areas and the few residents that remained during those difficult times, but it proved to be surprisingly resiliant, and even in a significantly weakened state, it still provided a means to enpower local traffic.

There were many failed attempts to revive the road and it's surrounding regions, but it has only been recently that a coalition of forces along the length of the road have succeeded in reviving it. Anchored by the Savi family in Venza, a new baron in the Barony of the Lost Hills, who has turned to the lumber trade to revitalize both his own region and the road, and the remaining branches of the Johnson family in Tritower and Gist, the road is once more showing life and promise, this time backed up not just by the sheer will of one man, but the power of a strong coalition that promises to get only stronger as the economic potential the road offers is finally truly tapped into.

Features of the Silver RoadEdit

There are numerous stops and threats along the Silver Road. Some distances have been estimated based on adventure narrative.

The stretch of road from Venza to Tritower runs 400 miles through hills and forests with a road/trail (.75 movement modifier). Mileage listed below is distance from Venza.

The stretch of road from Venza to Gist runs nearly 800 miles through hills and forests with a road/trail (.75 movement modifier).

Retrieved from "https://livingpf.fandom.com/wiki/Silver_Road?oldid=39020"
Community content is available under CC-BY-SA unless otherwise noted.