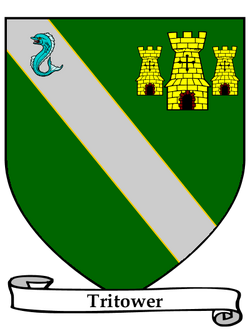 The small port of Tritower that sits on north coast of the continent about a weeks travel away from Venza on the Silver Road. It's a large town that straddles the line separating the semi civilized areas of the Venza region from the wilder frontier of the Landadel Baronies. Mostly humans, with a good sized merfolk colony living under and around the rock that defines the northern edge of the harbor, Tritower is so named for the 3 towers that ring the island the town sits on. To the east lies farmlands for a couple of miles before giving in to the scattered forest and fields that define the road from Venza to Tritower. West of Tritower is wilderness and scattered settlements still struggling to stay afloat. At any given time, it boast somewhere between 2500 and 5000 souls in or immediately around it. Originally under Venzan control, it has since gained control of its fate, but remains an important ally of Venza, with its harbor usually having at least half a dozen Venzan navy ships docked and/or being repaired, and the castle houses the garrison that patrols the northern reaches of the Venzan region.

Owners of the private estates along the Silver Road to the southeast will often come into Tritower to pick up supplies, providing one key part of the local economy. One of the other elements in the local economy is the furs and lumber collected in Tritower from the surrounding area, and river traffic that comes down the Tang River to the port. These are then periodically shipped out or sent down to Venza on the Silver Road. The last, and biggest, element of the local economy is the port that serves as a rough midway point between Venza and the Great Delta, and the only place on that route to stop where ships can repair and resupply easily.

Picture St. Louis in the late 1800's, it's basically a border town that serves as a last stop before entering true wilderness. Produces little itself, except that which is useful to the port and the few travelers from the road and river, it still serves a vital economic purpose as a gathering place of the region's natural resources.

The Clockwork Boar - Once a small fort complex that overlooked the approach to the castle on the bluff above, it now serves as the premier inn for Tritower, complete with a space for merfolk to swim in from the bay and enjoy a drink.

The Clamshell - Run by the grizzly looking half-elf Mac, this ship run aground near the edge of the dock district serves as a tavern for the local working class folk who toil on the docks. Despite it's rough appearance, it's a pretty quiet joint, and Rosco, Mac's parrot and the establishment's menu, offers insight to a surprising array of seafood options and drinks.

Two Tails - One of several wholesale merchants that operate in town, Two Tails focuses on bulk trade between Tritower and Gist. In the past, he was exclusively ship based, but the re emergence of the Silver Road has him exploring options for growth in the land trade.

Merbeer - brewed by the merfolk of Venza and Tritower, this alcohol has a small, but dedicated, following of supporters in those cities, and increasingly farther inland.

The village of Whiteoak, a day to the east.

Retrieved from "https://livingpf.fandom.com/wiki/Tritower?oldid=37117"
Community content is available under CC-BY-SA unless otherwise noted.